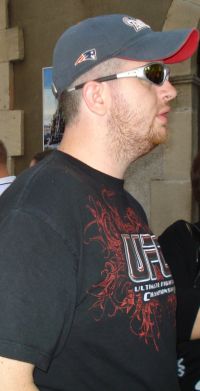 Yeah so – I’m Scotsman, and if you’re reading this site you most likely know who I am.  For the few who don’t though, or just enjoy reading my life history…

Born January 23rd, 1981 in Glasgow, Scotland.  Parents split up when I was about 8, I was the typical “humour as a self-defense mechanism” guy.  My dad moved to Ontario, Canada and when I turned 16 I decided to get out of no-hope Scotland join him.  Best decision I ever fucking made.  I really became my own person when I moved to Canada, and being involved in the punk scene helped as I was around a lot of independent people, and it helped me become more independent.

I got into good ol wrasslin’, and while being at school in Canada also ran a few wrestling websites like Pro Wrestling World and The Pedigree.  I also wrote wrestling news for a ton of newsboards.  Then I started writing for a wrestling opinion board called Wrestling Uncensored, where the “true” Scotsman finally came out, an uncouth son of a bitch who loved to piss people off.  I should note that during this time I did all this for free, never making a fucking dime.  Oh to go back ten years, where I could have made a fucking fortune on the web.  But I digress.

The opinion board closed after awhile, around the same time I got a great job doing IT for the Government.  Great job as in it paid great that is – the place itself was a fucking nightmate, with a bunch of people with nothing better in their lives than to create a negative environment and make everyones lives hell.  I then started a blog called Scotsmanality which became a decent sized entertainment site for awhile, and was where I started my first community.  You can still find that community many years later at the No Pants Provided Forums.

While work was a hellhole, it was still a good-paying hellhole so I stuck it out there and am glad I did because I met my future wife there, who was a summer student.  She was studying to be a nurse at one of the best universities in Canada, Queens.  Unfortunately I knocked her up and she had to drop out.  After having my first kid, I never really had time for the web anymore, especially as my site Scotsmanality was more based on my immature adventures, and as sad as it is to say, being a father I….*shudder*….grew up.

So I closed the site, and that gave me lots of spare time.  During that time I discovered the wonderful world of online poker, and after a few months of treading water, discovered my calling as a 7 Card Stud player, and proceeded to do many online rapings of other players bankrolls.  To date, I have played over 2 million hands of 7 Card Stud, which is just crazy.

This “hobby” ended up paying for my whole wedding, which was in the five figure range.  I decided to take the plunge, took a year off from my job and try and make a living as a professional poker player.  Around the same time I became mod of the poker sub-forum on SomethingAwful.com, and my first act as mod was to create a bonus whoring guide for all the guys on the forum.  Bonus whoring is basically going from site to site, playing the minimum amount of hands to collect a bonus, then moving on.  After writing the guide I found out there was a whole marketing world behind this, where I could actually sign up as an affiliate for that site, and make money from players going there.  For example – if I get a guy to sign up, deposit and play at least 200 poker hands, the poker room would pay me $50!  Sweet deal I thought.  However i never intended to profit from this, and actually used it to give the money back to the poker players on Something Awful, be it just straight up cash rebates or via freerolls etc.  The site I created for all this was Ultimate Poker Bankroll.

I soon realized what a money making opportunity this could be.  I mean shit – all I have to do is get players to go online and gamble, and I make money from it?  Casinos were even more lucrative – especially on revenue share.  If I refer a dude to an online casino I get 30-40% of his losses.  Imagine referring someone to a casino, then sitting back and watching them lose $10,000 every month?  Shit, that’s $4k a month, just for that one referral.  Sign me up!

And so that’s what I did – I quit my job, and decided to go into online marketing full time.  It was a risky thing to do, especially with supporting a wife and child, but I couldn’t turn this opportunity down.  So I started off with a “mega-site” that covered casino, bingo, poker and sportsbooks called TheUltimateCasinoGuide.com.  To be honest, this was a disaster for the most part – shit look at that domain name, with “The” in it.  That is amateur 101.  However I used that site to learn a lot, and spent many months reading and studying and just seeing what everyone else could do.

As of this writing, October 2008, I now run over 30 sites.  You can see some of my major sites at DealerDanGaming.com, as they are all under a “network” of sites, although I have a lot of smaller sites that target small niches not linked there.  I make a ton of money, yet still work my ass off every fucking day because I have such a passion for online marketing.  I even have a site to help new affiliates called Poker Affiliate Bible.  There is also two major poker rooms that have credited me for single-handedly turning them from nothing sites into sites that bring in tens of millions a month in net revenue.  I mention this not to brag – but because I am proud of it, and it just gives me such a great feeling knowing my hard work is appreciated like that.

Also as of this writing I currently have two kids – and lets hope it stays that way.  To say I love them would be an understatement – I can’t even put into words my feelings for them, but they are my world and I tear up just thinking about how fucking great they are.  Here are my babies Mason and Ella: 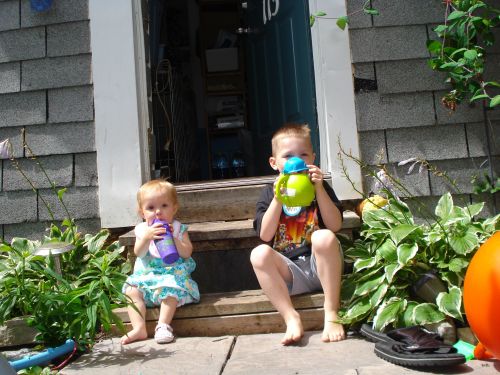 That’s uh….pretty much it.  Enjoy the blog!