Had to look after Ella this morning for an hour while the wife drove her mom to a doctors appointment, so I was a bit late starting work today.  Once I did, I spent most of the morning content writing.  I wrote my latest 360 Achievement Challenge, and then an article for Poker Affiliate Bible about Iplaybingo, and why they are scammers.  Then I caught up on some communication, and ran my NBA betting system.  Sadly no picks today, but Bulls covered the other day, so always nice to get off to a winning start.

This afternoon I’m going to launch the NBA Betting Tips site I think – shouldn’t take too long to do.  Also got a few other things I can hopefully crank out, and maybe stop working around 4pm and play me some 360.

As for Halloween – well in my article on the 30th, I wrote about all these plans I had when I woke up Friday.  Unfortunately I didn’t wake up till noon, and when I wake up late I may as well not wake up at all – I am just extremely unmotivated and never in the mood for work.  I did start the NBA betting system, but that was pretty much it.  Fallout 3 came in the mail so I played that for a few hours, then basically relaxed and did fuck all until it was time to go out with the kids.    Mason went as Darth Vader, and Ella went as a butterfly: 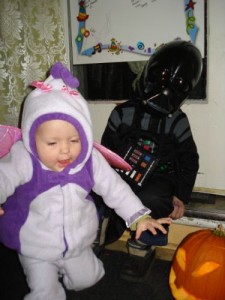 I didn’t bother dressing up.  To be honest I’ve lost all passion for Halloween, I think it’s because on the days preceding Halloween, all you hear about is how to be safe for Halloween.  This year the police even put flyers in everyones mailbox.  Like fuck that – there comes a time where you just need to call off the whole thing if you’re worried about that.

Plus things are so different now, that the parents always go out with the kids.  So you know what that means?  No parents at home!  No-one to give out candy, because they’re too busy protecting their goddamn kids.  HRHomer posting pictures of him on the bog as Freddy Kreuger just confirmed it – Halloween is useless, and a waste of time.  Don’t even get me started on those cunt teenagers who come around not even in fancy dress, smoking cigarettes and asking if you’ve “got any candy we can eat”.  I usually just tell them where to go and slam the door on their face, but I think next year I’ll poison some candy and give it to them or something.

We also went to the local school where every year they do a big haunted house.  It’s pretty neat because they have rooms that are all dark, then guys hiding on the floor who reach their arms out to grab you.  I ended up standing on one(deliberately) and the guy let out a big YELP which was great.  Mason was scared shitless though, gotta toughen him up.

And that was pretty much our Halloween.  Lots of candy, and not much else.  Not back to work!