So Saturday was Masons birthday party.  He actually doesn’t turn 5 until the 14th, however as there is a possibility I’ll be in Vegas for Lesnar vs Couture, we decided to have the birthday with kids immediately after Halloween, as that means they’ll be able to dress up too.  Then around his birthday we’ll have another party for him, but that one with family.

So yeah – it was also going to be held at our house.  Nothing like 20 screaming kids fucking up your house for five hours straight.  Sigh.  So I woke up on Saturday, smoked, took valium, watched soccer and prepared for the onslaught of these wired, hyped up kids, who were just going to eat candy and get even more hyped up.

The party itself thankfully wasn’t too bad – no dead bodies or anything, so I consider that a success.  One kid got a bloody nose, another fell down the stairs, and we had a big dunk tank where they bobbed for apples, and one kid actually fell into it, but that was the extent of the injuries.  Christ though – at times this was just brutal.    You could not hear yourself think, as all the kids just tore around the house playing “tag” and knocking shit over.  Within 10 minutes of them being there, basically every toy had been pulled out and left unattended on the floor for everyone to step on.

The only other “highlight” of the party was when one of the kids, who was dressed as a transformer, asked me to remove his wrist pad, which was attached to his costume via a safety pin.  So he held up his arm and I started to remove it, then he yelled “I CAN’T HOLD IT ANYMORE”.  I thought he meant he couldn’t hold his arm up anymore or something…until I felt his URINE on my bare feet.  Yep, the kid had just pissed all over the floor, and all over me too.  Yay.

So yeah – it was quite the party, and unfortunately I’ll have to do something like this at LEAST twice a year, possibly 4 times a year assuming we keep having these friends and family parties separate.  No more fucking kids for me, believe me.  To make things worse, one of the kids stayed over and him and Mason just fought non fucking stop, as well as hogged up the XBox, so I spent most of the night just cursing life.

Mason dressed up as Darth Vader again, while Ella was….something green.  I am not sure exactly, here is a picture of her in my chair: 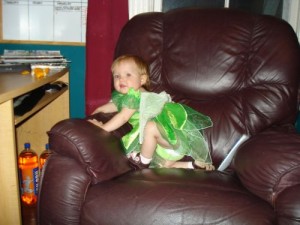 She is very funny lately, because her new thing is the second I leave the room, she RACES to my chair, climbs up in it and starts using my computer(usually shutting it down).  Like I don’t have to be away for long, I’ll walk into the kitchen, be back in 30 seconds and she’ll be in my chair giving an evil giggle.  It really doesn’t sound like much, but just the joy I get in something like that is one of the biggest joys in being a parent.