With my mum being over as well as the Niagara & Barcelona trips I really fell behind with everything I have to do, so I am fucking swamped at the moment.  I’ve got my just general to do list which has some general stuff like call Samsung asking where my new monitors are to some small website related items like Update the DDGN Homepage.  I’ve then got my separate website to do list, which is just absolutely huge.  Along with the to do lists, I’ve also got a separate list of site updates I have to do.  Along with that, I have notepads filled with ideas on new websites and new projects I want to get started.  So feeling a little bit overwhelmed at the moment.

What is also holding me up is I wanted to spend this week launching my new rakeback site, RakebackResource.com.  Unfortunately me and the designer have had tons of problems – not related to each other though.  Basically I went to him with two projects(USCasinoListings.com being the other one) in late August, however he was going out of town and wasn’t sure if he could get either of them done.  Well unfortunately he focused on US Casino Listings when I decided Rakeback Resource was priority later on, so he had to stop that to work on that.  Then he went on vacation, and when he returned it was during my Niagara/Mom/Barcelona time so I wasn’t able to communicate as well as I could.  He got me a template, I sent him the required updates as well as a few other things to try out, and he got that back to me.  We agreed, settled on a price, and all is good, right?

Well – wrong.  I usually pay him via moneybookers but the same day I went to pay him his moneybookers account was frozen.  So he signed up with Ecocard, and I went to transfer money over there to him.  However it gave me an error message saying I couldn’t do transfers and to contact support.  So I contacted support, and they send me an e-mail saying I have to verify my account, and they have to call me on the phone.  So this is the day before I go to fucking Barcelona.  So I e-mail them and give them my telephone number to call.  Well then, literally 15 minutes before I headed out the door to go to Toronto Airport, I get an e-mail from Ecocard saying “As per your request, we have closed your account”.  What the fuck?!  And as I was heading to the airport I couldn’t deal with it, so I was sweating the whole way to Barcelona, as I have about $15k currently in there.

After arriving in Barcelona that was the first telephone call I made, and finally got someone to fix up my account.  So then I get my designers account number, and go to transfer to him, and I get a different error message this time, saying I have to contact p2p@ecocard.com.  Sigh.  So I contact them 3 days in a row and get no response.  Then my laptop dies in Barcelona and I can’t do anything else till I get back.  So Sunday I got around to it, and tried the transfer and lo and behold it worked!  So I contact the designer to let him know payment went through and what has happened?  His computer has died and he is unable to get me the design currently.  Wheeeeeee.  So it is going to be a few days before that happens, and it sucks because now I am in a holding phase as I don’t want to get involved in any big projects till I get that done.  Grrrr.

For those curious – the website design is similar to this: 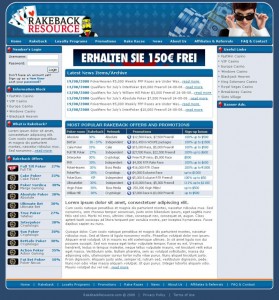 Although there are a few changes(the header has been revamped, content will change etc) but I’m excited about this, and it is nice to have my first mega-rakeback site going, as all other rakeback sites have been combined with sites, or just focus on one or two poker rooms.  I also have a great programmer who has been working on an exciting backend for it, so it is hopefully all going to fall in place soon.

Wow – I typed a lot.  So yeah – yesterday was basically getting up to date on all communication(e-mails, PMs on about 20 different forums, Skype/MSN Chats) and then I went out for a massage.  Stopped by the grocery store and picked up some Veggie Ground Round, then made my infamous Veggie Chili while watching Entourage.  Today so far I’ve been working on some small things, and just trying to hack away on the ol to do list.

Just now I am going to go watch Ratatouille with the kids, while either reading through the pile of SEO/Website related magazines I have and making notes, or doing some content writing.  Sounds like a fun night!