Well, today was quite the busy day.  First up, I have a friend who about three years ago got into religion in a big way.  She’s a hardcore Christian, and has since started pushing it on others, especially me.  One day it got really bad, and I told her that she was an annoying, nauseating fucking cunt and not to talk to me again.  Well I never heard from her in a few months, then she found out I was making a living from promoting gambling.  So I started receiving e-mails on a weekly basis with her preaching to me, and telling me I was doing the devils work.  She is seriously fucked up, and would tell me she was praying for me etc.

Well now she has discovered facebook, and in the two days she has signed up, she found my wife, added her and then sent her this message:

Your husband is not replying to my e-mails. I have sent 15 e-mails in the last month and he hasn’t replied to one of them. Is he overwhelmed with life and just being here? Why does he have to make a living doing the devils work? Pray for him, seriously. I wish he believed and accepted Christ, seriously I do. That would certainly help him, to take each day at a time and not got anxious about tomorrow and just learn to depend on and know that God will see him through. I may sound dumb to you, but I hear so many broadcasts by Charles Stanley and James McDonald that I very much agree with. Not all those people., but if you listened to 102.3 FM at 9pm it’s In Touch with Charles Stanley and at 8:30 pm it’s Walk in the Word with James McDonald and he’s always giving stats for people who are trying to do life on their own without Christ in their lives, and how those are the people that commit suicide. You should try to listen to Charles Stanley in the evening, he’s very encouraging. I just want to save your husbands life. Don’t you?

Seriously – what the fuck?  I don’t really believe in god or anything like that, but I wouldn’t call myself an atheist either – basically I don’t give a fuck about religion.  If you want to be religious that is great, go for it – I have absolutely no problems with it.  If you don’t believe in god, or a satan worshipper – sure, whatever.  But don’t fucking preach to me when I have told you not to, and especially don’t contact my wife and say shit like that to her.  I have absolutely no idea how to handle this person, but telling her to back the fuck off and ignoring her hasn’t worked, so I’m going to have to do something now she is contacting my family members.

Sigh.  Oh well.  What else happened today?  I woke up a bit late, but managed to catch most of the Scotland game.  I should’ve just stayed in fucking bed.  Then we went out to the Thomas the Tank Engine show.  It was alright I guess – thanks to my hookup down at the arena we always get front row seats, which is great for the kids because they don’t have some big tall giraffe-like cunt in front of them: 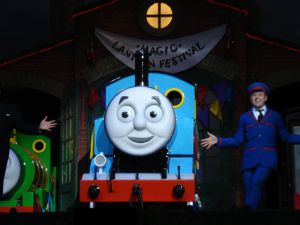 After that we took the kids to the park for a bit.  Then I chilled out before starting work at 8pm on Poker Affiliate Bible – and what a lot of work it was.  See – when I revamped the site with the new design a month ago, I had to create a whole new database to incorporate all the design stuff I was doing, and so there was a ton of shit that still needed to be done.  I’ll list everything here just so you get the idea of what things like this can require, and then understand the time it takes.  So first I fixed a bunch of broken links.  Then I studied click-rates, realized the sidebars would do better on different sides, so switched them.  It makes the design look better too.  Then I spent a long time figuring out the best way to handle VIP articles, and writing a script to deal with that.  Next up I removed the comments option entirely, as I don’t require comments on the site.  Then I updated a few articles that needed updating, like the Absolute Poker Affiliate Program Review.

Next up, I updated the navigation bar at the top of the site.  I linked two articles that I had forgot to link, in the navigation bars.  I did some small text changes(ie: “Old articles” to “All articles).  I created a sidebar to make it a lot easier for people to register – and building a mailing list is huge, so that was something that needed done.  Then I spent some time cleaning up the “new article ideas” documents I have on my hard drive, and compiled them into one big document to make it easier to maintain.  I then had to export the user database for both regular and VIP subscribers from the old site, and import them into the new site.  Then I had to send out e-mails to both regular and VIP subscribers letting them know about the changes, and that they had to log in to their account again for changes to take effect, as well as giving VIPs their unique password, and also letting them know a new article was up.  I also spent some time analyzing stats, updated the banner, and sent out an e-mail to an affiliate manager about a possible interview.

So as I said in the subject – Whew!  Probably a few more things I forgot too.  Glad I got that out of the way though.  It ended up taking me from about 8pm until 2am to do, although I had a few breaks and was communicating over MSN, E-mail & Skype through it.  Still, it was something that needed done and I kept putting off, so I’m glad I finally managed to get to it.

And now I get to go to bed at 3am, and wake up tomorrow so I get to spend Thanksgiving at my wifes family.  WHEEEE.  It is even more fun lately because most of her family have discovered facebook poker, so they spend hours upon hours telling me how their AA got beat by 76 and they lost 10,000 whole play chips over it.  Boy, I can’t fucking wait.